Apache Flink® 1.3.0 and the Evolution of Stream Processing with Flink

It’s official: on June 1, the Apache Flink® community announced the release of Flink® 1.3.0. The announcement on the project site and the changelog provide detail on what’s included in the release. In this post, we’ll look instead at how 1.3.0 serves as an important step in Flink’s maturation since March 2016’s 1.0.0 release. 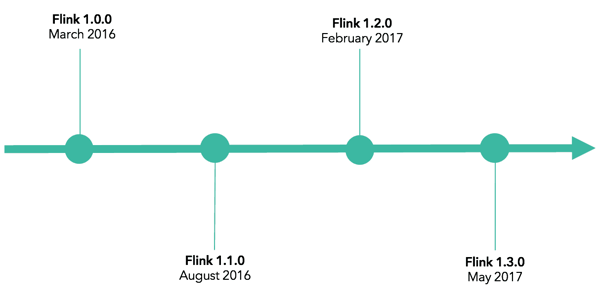 Flink’s evolution over the past 14 months mirrors how usage of the project has evolved, too. These days, we at data Artisans see many Flink users with:

Next, we’ll look at each of these categories in more detail. APIs for Event-driven Stream ProcessingScalability and Large State HandlingBeyond the DataStream API: High-level & Domain-specificApplication Management, Deployment, and EcosystemOpen Source Community Growth

In the past year, we’ve seen many instances of Flink users building not only real-time analytics platforms, but also applications that act on insights from analytics in real-time. This “convergence of real-time analytics and data-driven applications”, as our CTO Stephan Ewen has called it, was a recurring theme at Flink Forward San Francisco in April. And Flink’s streaming APIs have evolved to meet the needs of these use cases, enabling true event-driven stream processing. 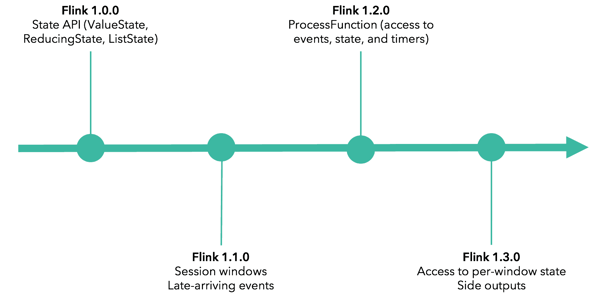 A stream processor capable of low latency and high throughput can only be useful if it also includes robust tooling for state management and failure recovery--both of which are critical for managing continuous applications in a high-stakes production environment. And so the Flink community has added support for a range of features to accommodate the increasing size of state and the scale of data processed by Flink applications.

There’s been significant progress in the past year on the Flink APIs beyond the DataStream API, and two relevant examples are the Table & SQL API and the complex event processing (CEP) library. The Flink community has long requested high-level APIs that make stream processing more accessible to users who aren’t proficient Java or Scala developers. Flink’s Table & SQL API achieves just that, making stateful stream processing available via SQL, the standard language for data manipulation.And Flink’s CEP library makes it easy to detect complex event patterns in a stream of endless data--a use case that’s particularly well-suited for a stateful stream processor.

Where your application runs and how you ensure it’s working as expected are equally as important as development, if not more so. The Flink community has added a broad range of features that make it easier to deploy, manage, and monitor long-running Flink applications within the broader ecosystem.

The Flink community continues to work on a major refactoring of the internal deployment abstractions as part of the FLIP-6 effort. The effort was started after Flink 1.1.0 and will be finalized with Flink 1.4

Given what we’ve covered so far, it’s no surprise that the number of contributors in the Flink community has grown considerably since last year, too.The Flink 1.0.0 release announcement from March 2016 notes that there were 64 people who contributed to the release, and the Flink project as a whole had only approximately 160 contributors at that time. Over 100 people contributed to the Flink 1.3.0 release, and at the time of publication, there were 319 Flink contributors listed in Github--nearly 100% increase in contributors to the project! The number of Jira issues covered by a release has increased, too. Flink 1.0.0 resolved 450 Jira issues, while 1.3.0 resolved over 680.Note that Flink 1.1.0->1.2.0 spanned 7 months, while Flink 1.2.0->1.3.0 spanned only 4 months. 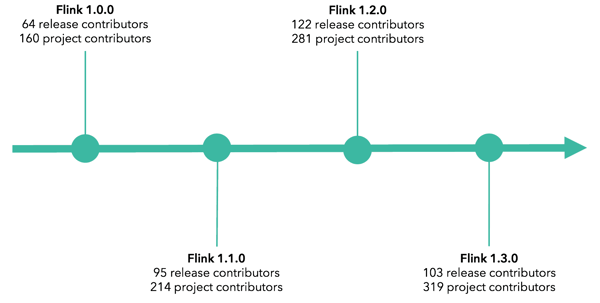 Flink 1.4.0 development is already underway, and the 1.4.0 release is scheduled for end of September 2017.We encourage you to become a contributor, or if you have questions about using Flink, to reach out via the community mailing list.

END_OF_DOCUMENT_TOKEN_TO_BE_REPLACED

Today we are extremely excited to introduce our new visual brand identity for Ververica and our products, such as Ververica Platform! This has been in the works for many months, and a project we...
END_OF_DOCUMENT_TOKEN_TO_BE_REPLACED

The previous article in this series focused on continuous application monitoring and presented the most useful metrics from our point of view. However, Flink’s metrics system offers a lot more, and...
END_OF_DOCUMENT_TOKEN_TO_BE_REPLACED