Till Rohrmann (@stsffap) is an Engineering Lead at Ververica. This post also appeared on the DC/OS blog. Thanks to Jörg Schad, Judith Malnick, and Ravi Yadav from Mesosphere for their help with writing and editing.  If you're interested in learning more, check out this post from Mesosphere about partner integrations in DC/OS 1.9 or register for this webinar co-hosted by Mesosphere and data Artisans to discuss running Flink on DC/OS. And if you're interested in this post, you might also like to know more about Docker images for Apache Flink.Last December, data Artisans organized the first-ever Apache Flink® user survey. We asked the community where they were running Flink, and here’s what we found:

Just under 30% of respondents were running Flink on Apache Mesos either on-premise or in the cloud. Notably, Flink hadn’t even provided official support for Mesos until this month’s Flink 1.2.0 release. This 30% is a testament to Mesos’ popularity.For the uninitiated: Mesos is a distributed systems kernel that abstracts CPU, memory, storage, and other compute resources away from machines, making it simple for teams to manage resource allocation and scheduling across datacenter and cloud environments. It has been widely adopted for both microservices use cases and analytics use cases: last November, Mesosphere reported that 85% of Mesos users are running containers with a microservices architecture, and 68% are running data services and analytics. It comes as no surprise, then, that demand for Mesos support was on the rise in the Flink community and showed up as a common feature request in the Flink user survey:

“Excited for the upcoming Mesos integration.”  “Full support for Mesos” “Support to run on Mesos”

Apache Flink 1.2.0 includes many improvements to Flink deployment modes, and one such improvement is support for Apache Mesos and DC/OS (datacenter operating system, the open-source Mesos distribution and application management layer provided by Mesosphere) as first-class citizens. Here at Ververica, we have seen a wide range of production Flink deployments, so we appreciate how quickly the resource manager space is evolving and how Flink, too, must evolve---especially as Flink supports a broader variety of use cases. A tighter integration with Mesos and DC/OS represents an important step forward in Flink’s capabilities. In this post, we’ll give a high-level overview of deploying Flink on both Mesos and DC/OS. Be sure to refer to the complete documentation before starting this process yourself.

How Flink interacts with Mesos

Flink’s Mesos and DC/OS implementation in 1.2 consists of an Application Master, which runs the JobManager and the ResourceManager. The ResourceManager hosts the Mesos scheduler communicating with the Mesos cluster and allocating resources for Mesos tasks, which run Flink's TaskManagers. 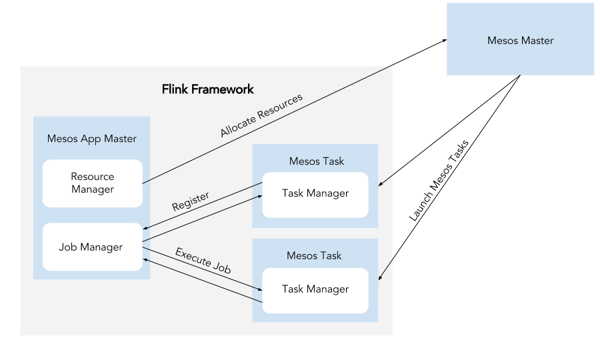 In its Mesos user survey, Mesosphere found that 87% of new Mesos users are running DC/OS, and so Flink’s Mesos support wouldn’t be complete without DC/OS support, too. To run Flink on DC/OS, first install DC/OS from the official site. Note that DC/OS includes Mesos, Marathon (a service that will supervise your applications and maintain their state in case of failures), and ZooKeeper, all pre-configured out of the box. Once your DC/OS cluster is ready, you can simply search for “Flink” in Universe, install the package with a couple of clicks, and you’re ready to get started. If you’d like to use Flink’s checkpoints for fault tolerance (recommended for most production deployments), you’ll also need to install HDFS from the Universe. We’d like to extend a big thanks to our friends at Mesosphere for their contribution to DC/OS support, enabling a seamless integration between Flink and DC/OS.

First things first: the Mesos documentation will walk you through initial Mesos setup. Next you should also install Marathon, since you usually want your cluster to be highly available (HA). In order to run Marathon, you also need a ZooKeeper quorum running. We assume for the following that ZooKeeper is reachable under node:2181. Lastly, we recommend installing a distributed file system where Flink can store its checkpoints. We assume for the following that HDFS is installed and can be reached via hdfs://node/. After installing Mesos and Marathon, we have to enable Flink’s HA functionality by adding the following lines to Flink’s configuration file flink-conf.yaml:

Last but not least, we have to start Flink as a Marathon application by giving the following JSON application description to Marathon:

Congratulations. You now have a highly-available Flink cluster running on Mesos!

The Flink community is actively working on improvements beyond the 1.2 release, and will add two key components in the near future.

We believe that the Flink community’s work in partnership with Mesosphere will enable a broader range of Flink deployments, and we look forward to hearing user feedback about this new integration. Please contact the Apache Flink user mailing list if you have comments or questions. 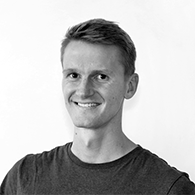