In November 2017, data Artisans conducted a second-annual Apache Flink user survey. There were a total of 217 responses, and the survey provided of lots of useful insights and feedback about Flink.At the end of 2017, we put out a press release with some of the highlights from the survey, and you can see coverage from various media outlets here. In this post, we’re going to recap some of the key takeaways from survey data, and we’ll also share (anonymously) responses to open-ended questions from users who gave us permission to do so.Separately, we’re in the process of compiling a report with all survey data that we’ll make available for download from our website--stay tuned for that.First, here are a few highlights from the survey data. Apache Flink users are planning to do more with Flink in the coming year. 87 percent of survey respondents plan to deploy more Flink applications in the coming year. How many applications are planned? Of users whose organizations are planning to deploy more applications: 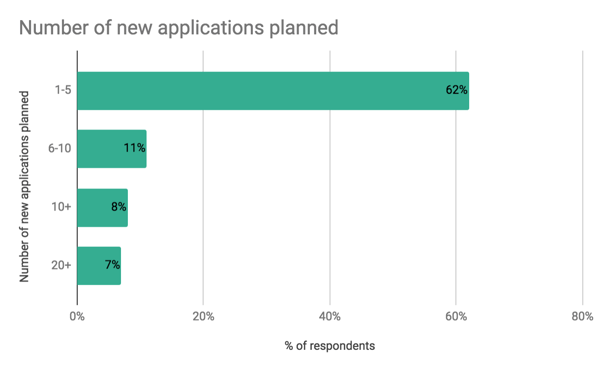 Machine learning is on users’ roadmaps. Many respondents who are planning to deploy new applications will be using Flink for machine learning, both for model scoring and serving (34 percent) and model training (30 percent). A range of other types of applications are planned, too: 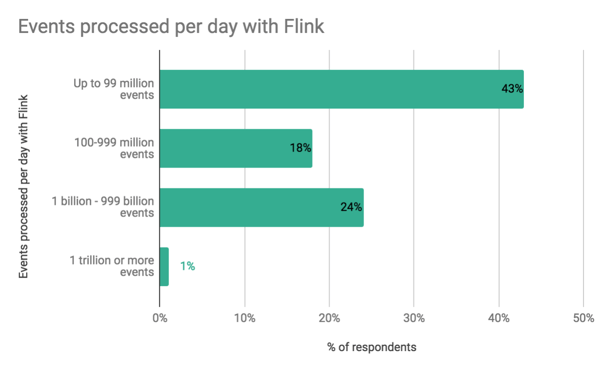 Flink users are hoping to see more documentation: 55 percent of respondents, when asked what new features or developments they’d like to see in Flink or the Flink community, cited docs, programming guides, and resources as a top priority. Other requests include:

In the latter half of the post, we’ll include a selection of open-ended feedback from respondents who gave us permission to share their answers anonymously. There are lots of great suggestions here, and we really appreciate the detailed ideas that respondents provided. Many of the features and requests covered below are being worked on by the community already. If you're interested in seeing work that's already underway, we recommend the following resources.1) The Apache Flink Jira2) Flink Improvement Proposals (FLIPs) in the Apache Flink wiki3) Flink dev@ Mailing List4) Flink dev@ Mailing List ArchiveQuestion: What new features or developments would you like to see in Flink and the Flink community?“Scala 2.12 support” “More documentation regarding state management. For example, how to avoid using the DataStream API in ways that will cause the state to grow quickly.”“Python support and better Mesos support”“Better support for integration with Mesos together with troubleshooting guides and best practices configuration so it works out-of-the-box, and if not, a chance to figure out why”“Better UI dashboard”“Monitoring UI could be improved”“Machine learning support for training & serving more algorithms”“Scheduled periodic savepoints”“Watermarks per key”“Better tooling for running in production; better instrumentation - automatic bottleneck detection and dynamic scaling based on throughput; more consistent docs”“Side inputs!”Are there any aspects or features of Flink that we didn't include on this list that you'd like to address?“More info about best practices and troubleshooting guides”“Better documentation on how work with containers (Docker, K8S, Mesos)”“Zero-downtime deploys for streaming jobs”“Integration of support of machine learning algorithms in a streaming environment, for model serving and training, integrating external existing libraries such as Flink-JPMML.”“I'd like to see more examples and walkthroughs of moderately-complex, real-world use cases to help learn how to compose things together.”“Best practices and white papers around use cases from an end-to-end solution and resource management would be nice for enterprise architects.”“The one area where we would love to see more support is around testing stateful operators.”We welcome any final comments about any aspect of Flink.“We have used streaming and batch processing engines before, but Flink is totally different with great stateful streaming, and we love the CEP library.”“Best stream processing system because of event time support, late events handling, snapshotting, checkpointing, exactly-once processing, and the low-level Scala API.”“Love the project and community, excited about the roadmap!”“Flink is awesome! But it's hard to grasp event time operating and configure it properly in a scenario when we have to both reprocess old data and then handle online data (when we evaluate new ML models, we do that).”“Table API is important for us, being able to have a common API for streaming and batch”We'd like to thank all of the survey respondents for providing valuable feedback, and as mentioned above, we'll be publishing a full report with survey data in the coming weeks. If you're interested in seeing data from the 2016 Apache Flink user survey, you can find our part 1 and part 2 summaries on our blog.

END_OF_DOCUMENT_TOKEN_TO_BE_REPLACED

Today we are extremely excited to introduce our new visual brand identity for Ververica and our products, such as Ververica Platform! This has been in the works for many months, and a project we...
END_OF_DOCUMENT_TOKEN_TO_BE_REPLACED

The previous article in this series focused on continuous application monitoring and presented the most useful metrics from our point of view. However, Flink’s metrics system offers a lot more, and...
END_OF_DOCUMENT_TOKEN_TO_BE_REPLACED