What is a Broadcast State Pattern?

The Broadcast State Pattern refers to streaming applications where a low-throughput event stream (that, for example, contains a set of rules) is broadcasted to all parallel instances of an operator and is then evaluated against all elements coming from another event stream with raw data (for example financial or credit card transactions). Some motivating use cases for the Broadcast State Pattern are the following:

To allow for such applications, a critical component is the Broadcast State, which we describe below.

What is Broadcast State?

You can check our previous blog post to explore a step-by-step practical guide to Broadcast State in Apache Flink.

For Flink users keen to get started with Broadcast State, the Apache Flink documentation provides details about the APIs and how to use the feature in your pipelines.
There are 4 important things to keep in mind when using Broadcast State:

Although broadcasting the elements of a stream guarantees that all elements will (eventually) go to all downstream tasks, elements may arrive in a different order to each task. As a result, any state update for each incoming element should not depend on the ordering of the incoming events.

Upon checkpointing, all tasks checkpoint their Broadcast State, and not just one of them, even though all tasks store the same elements in their Broadcast State. This is a design decision to avoid reading from a single file during a restore and consequently avoiding hotspots. However, there is a tradeoff of increasing the size of the checkpointed state by a factor p (= parallelism). Flink guarantees that upon restoring/rescaling there will be neither duplicates nor missing data. In case of recovery with the same or smaller parallelism, each task reads its checkpointed state. Upon scaling up, each task reads its own state, and the remaining tasks (p_new-p_old) read checkpoints of previous tasks in a round-robin approach.

Broadcast State is kept in memory at runtime. Since currently, the RocksDB state backend is not available for operator state, Flink users should arrange their application’s memory provisioning accordingly for all operator states. 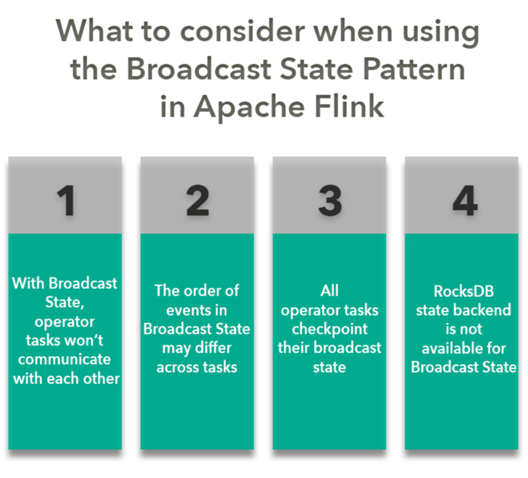 Sign up to Apache Flink Public Training in a location near you for a comprehensive introduction to stateful stream processing with Apache Flink or contact us with your questions and recommendations below. 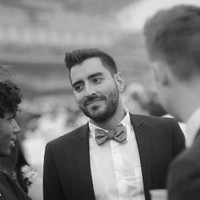