How to write fast Flink SQL

Flink SQL is the most widely used relational API based on standard SQL. It provides unified batch processing and stream processing, which makes it easy to develop applications, and is already widely used for various use cases.

Unlike the DataStream API, which offers the primitives of stream processing in a relatively low-level imperative programming API, the Flink SQL API offers a relatively high-level declarative API. This means that a program written with the DataStream API will transform into an execution graph without any optimizations, whereas a program written with Flink SQL must undergo rich transformations before it becomes an execution graph. Currently, the SQL planner provides different optimization techniques and, thanks to that, these optimization methods will help you write efficient SQL code.

Six main factors that improve the performance for a Flink job are:

In this post, we will introduce some SQL/operator improvements based on the above factors. We will also give you insights into Flink SQL including how it works under the hood, its workflows, best practices when writing your queries, and what is in store for the future.

A batch operator will receive a bounded dataset as input and produce a bounded dataset as output. For the current implementation, the operator will process the all input data as a batch, and the data will be spilled to disk once the memory runs out. When designing and implementing batch operators, we should try to avoid disk access to improve performance.

The transformation is deterministic from SQL text to LogicalPlan, and from ExecPlan to JobGraph. The optimizer is crucial even if there are numerous uncertainty transitions from LogicalPlan to ExecPlan. Now Let's take a rough look at the workflow of the optimizer.

A Flink SQL job may contain multiple insert statements, which are parsed and converted into multiple logical trees, i.e. Directed Acyclic Graph (DAG). So, we call the optimizer a DAG optimizer. The DAG optimizer takes LogicalPlan, Flink Conf, Constraints and Statistics as input, and generates the optimized ExecPlan as output.

Flink uses Apache Calcite for relational algebra optimization, which can only accept a single logical expression tree. Therefore, after the optimizer receives a DAG, it will first break up the DAG into multiple logical expression trees based on the view, and then use Calcite to optimize the tree one by one. View-based breakup will reduce duplicate computing. After all the relational algebra expression trees are optimized, they will be reassembled into a DAG of the physical plan, and reduce repeated calculations through subgraph reuse technology to form an ExecPlan. Based on ExecPlan, we will make changes and write.

In the Calcite optimizer, we have implemented a large number of optimization rules and attribute derivation to help us generate the optimal execution plan.

Now, we will introduce some optimization options to improve the performance of Flink SQL jobs based on some high-frequency SQL cases used in our production.

Sub-Plan Reuse is mainly used for reducing duplicate computing, we will explain the details with the following simple example.

The statements can be converted to the following execution plan, we can easily see that the Scan node will be executed twice, that is duplicate computing part (see the red dotted box). We can turn on Sub-plan Reuse by setting configuration table.optimizer.reuse-sub-plan-enabled=true (default is true), and the optimizer will automatically find and reuse the duplicate part in the DAG.

In the picture above, we can see that the scan operator is reused, but there is still a duplicate computing part (a > 10) after sub-plan reuse. It's very hard for the optimizer to find the duplicate computing expression in an operator, especially when the query is complex and various push down optimizations (e.g. filter push down, projection push down) are applied.

We recommend users to leverage View to solve the problem above. Views can not only improve the readability of the queries, but also help the optimizer find reusable parts. The query can be rewritten as the following: The execution plan will be optimized as:

Aggregate queries are widely used in Flink SQL. We will introduce some useful streaming aggregate optimization methods which could bring great improvement in some cases.

Streaming aggregation operator is a stateful operator, which uses state to store the intermediate aggregate results. By default, the streaming aggregation operators process input records one by one. When a record comes in, the operator will (1) read the accumulator from state, (2) accumulate/retract the record to the accumulator, (3) write the accumulator back to state. This processing pattern may cause performance problems of StateBackend, especially when State access is time-consuming and data skew exists after shuffling.

In order to solve the above-mentioned problems, we have introduced various optimization options for different scenarios.

Note: The streaming aggregation optimizations mentioned in this section are all supported for Group Aggregations and Window TVF Aggregations now. We can also see the introduction in the Flink documentation.

To reduce state access, we can introduce MiniBatch aggregation, which puts the input record into a buffer and triggers the aggregation operation after the buffer is full. The records with the same key in the buffer will be handled together, so only one operation per key to access state is needed. MiniBatch Aggregation is disabled by default, we should set the following options to enable it.

MiniBatch can significantly reduce the state access and get better throughput. However, this will increase latency because the operator starts processing the records until the buffer is full instead of processing them in an instant. It is a trade-off between throughput and latency. Another benefit of MiniBatch is that the aggregation operator will output fewer records, especially in scenarios where there are retraction messages and the processing performance of downstream operators is insufficient.

In the example above, the data is skewed after shuffling, the first aggregate operator instance will process more data than other instances. This may cause performance problems. Local/Global Aggregation is disabled by default, we can set the following options to enable it, while making sure that all aggregate functions in a query must implement the merge method.

Local/Global Aggregation cannot solve the data-skew issues for distinct aggregation if the distinct key is sparse, the following example illustrates this problem. We can manually rewrite the above query into the following to enable partial/final aggregation.

Or, we can set the following options to enable it, while making sure that all aggregate functions in a query must be built-in aggregation functions and be splittable, e.g. AVG, SUM, COUNT, MAX, MIN.

Note: Different from local aggregation, partial aggregation has state and shuffling cost, we do not recommend enabling partial/final aggregation if the input dataset is small or there are no data skew issues for the distinct aggregate.

In some cases, a query calculates distinct results based on the same value but different dimensions. Such as: a user wants to calculate the number of UV (unique visitor) from different dimensions, e.g. UV from App, UV from Web and the total UV. Many users choose CASE WHEN to support this, for example:

For the query above, the state corresponding to the same function with the same distinct field is stored independently in an aggregation operator. The state structure is shown in the figure below.

We recommend using FILTER syntax instead of CASE WHEN to let the planner do more optimizations to reduce the state size. Besides, FILTER is more compliant with the SQL standard.

After the query is rewritten, the state corresponding to the same function with the same different fields will be stored and shared in an aggregate operator. The new state structure can be improved as follows.

Join queries are widely used in FLINK SQL. There are different types of joins in streaming queries, the join in batch processing is called regular join in stream processing. Regular join is the most generic type of join in which any new record, or changes to either side of the join, are visible and affect the entirety of the join result. The state of regular join keeps both sides of the join input forever. The required state for computing the query result might grow infinitely depending on the number of distinct input rows of all input tables and intermediate join results. Reducing the state size is the key to optimize regular join performance.

There are three suggestions to reduce the state size of regular join:

Compared with other types of join, lookup join is the most widely used in production, so here is a further introduction to its optimization. We provide multiple optimization options to improve throughput:

Lookup function can support both synchronous (sync) mode and asynchronous (async), their operating mechanism is as follows, and we can see the asynchronous mode has higher throughput. If the connector has async lookup capability, we can use LOOKUP hints to suggest the planner to use the async lookup function.

In async mode, there are two modes to control in which order the resulting records are emitted: We can also use LOOKUP  hints to suggest the planner to use the unordered mode.

Caching is a common solution to reduce I/O and speed up lookup performance. Flink provides three caching strategies, FULL caching for small dataset, PARTIAL caching for large dataset, and NONE caching to disable it. We can also use rich options to control caching behavior.

The upstream jobs may not have end-to-end exactly-once, which will result in data duplication in the source table. So we often encounter the requirement to keep the first or last row. Flink SQL does not provide deduplication syntax. In previous versions, Flink used an aggregation query with FIRST_VALUE to find the first row for a key or with LAST_VALUE to find the last row for a key.

Now, Flink SQL uses ROW_NUMBER() to remove duplicates, just like the way of the Top-N query.

Top-N (a.k.a Rank) queries are always used to get the N smallest or largest values. Flink SQL does not provide Top-N specific syntax but uses the combination of an OVER window clause and a filter condition to express a Top-N query. Now Flink SQL provides 3 kinds of rank algorithms with their performance decreasing sequentially.

The following query can be converted to the UpdateFastRank operator.

The state of UpdateFastRank stores a map, its key is order key and its value is the record and the order number. The state size is greater than AppendRank, but less than RetractRank.

In addition to modifying the query to meet different rank algorithms, there are also some other optimization techniques to reduce state size or speed up state access.

Please note that heap memory of the task manager needs to increase with the increase of cache size, otherwise OOM exceptions may occur.

In the future, we will continue to improve the planner and focus on three areas:

END_OF_DOCUMENT_TOKEN_TO_BE_REPLACED 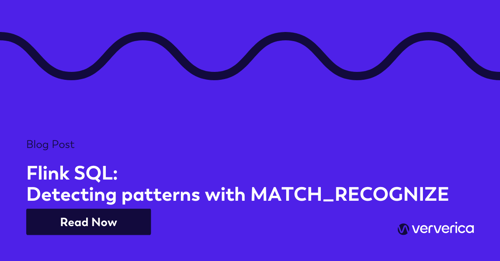 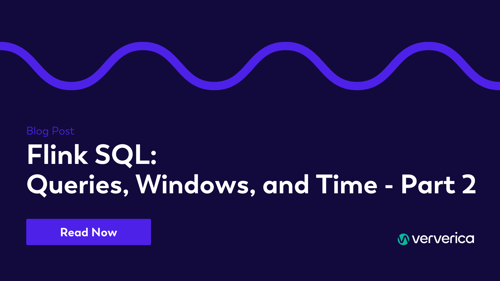 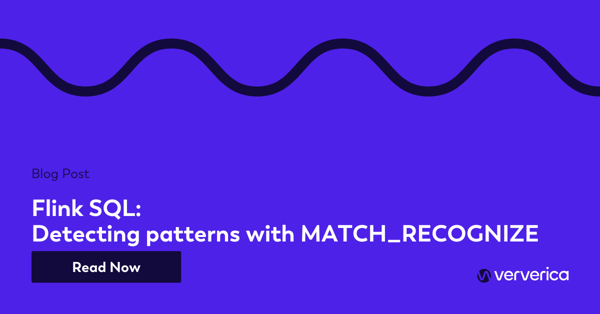 Flink SQL has emerged as the de facto standard for low-code data analytics. It has managed to unify batch and stream processing while simultaneously staying true to the SQL standard. In addition, it...
END_OF_DOCUMENT_TOKEN_TO_BE_REPLACED 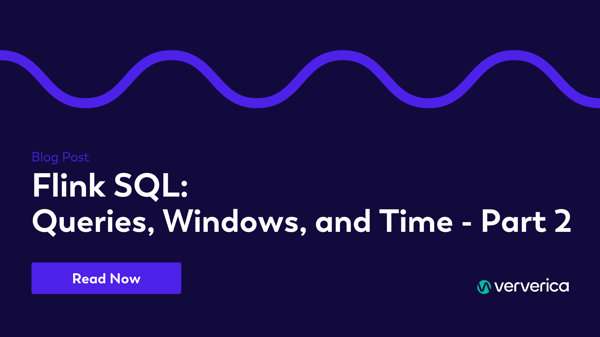 In the previous article, we covered some aspects of time windows and time attributes that you should consider when planning your data collection strategy. This article will provide a more in-depth...
END_OF_DOCUMENT_TOKEN_TO_BE_REPLACED