The Smart Systems IoT Use Case

IoT systems use data and artificial intelligence (AI) to monitor, control, or predict the behavior of internet-connected devices. They are the basis for new smart factories, smart cities, and smart vehicle fleets that are transforming the way society lives, travels, and produces goods.

The challenge for IoT software developers is to process and act on the massive amounts and variety of data these systems produce. If you are developing smart systems, this blog post describes the architecture of an open source IoT data platform stack that makes it easy and economical to handle the following IoT requirements:

This whitepaper provides a step-by-step tutorial that demonstrates how IoT streams can be processed and inserted into CrateDB for further analyses.

In this the following section, we explain how to meet the IoT data requirements above, and in particular, industrial time series processing, with an open source stack containing Apache Kafka, Apache Flink, and CrateDB. 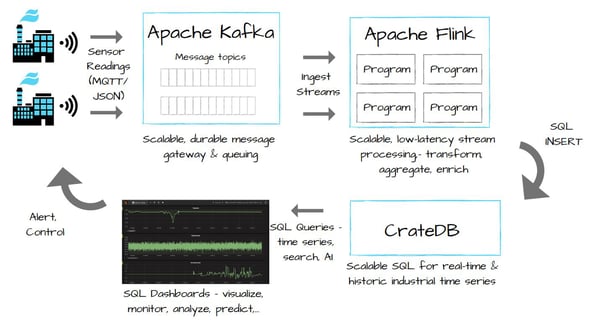 The stack uses Apache Kafka on the front line, to queue messages received from IoT sensors and devices and make that data highly available to systems that need it (e.g., Apache Flink).

Apache Kafka is a distributed, high-throughput message queuing system based on a distributed commit log. The core abstraction is a topic that is partitioned into multiple partitions. Producers, such as sensors in an IoT device, publish their records to partitions of a topic. The Kafka cluster durably persists incoming messages using the configurable retention policy that determines how long messages are available for consumption. Each partition maintains the immutable, ordered sequence of messages. Partitions are assigned to and replicated over multiple brokers.

Apache Kafka is a publish/subscribe-based messaging system. One or more downstream consumers subscribe to topics to read messages from its partitioned log. Consumers are assigned to consumer groups. Each record from a topic is processed by a single consumer from a group. Consumers groups load balance message processing over its consumers and allow parallel processing of messages.

The stack uses Apache Flink to process and inject the sensor data stream that has been queued by Apache Kafka, into the CrateDB database.

Apache Flink is a stream processing framework that executes data pipelines--stateful computations over the data streams. Apache Flink has the unique ability to perform the following:

The stack uses the CrateDB SQL DBMS to store and query data that has been processed and enriched by Apache Flink.

CrateDB is a new kind of distributed SQL database that makes the stack extremely adept at handling industrial time series data due to its ease of use (SQL), and ability to work with many terabytes of time series data with thousands of sensor data structures.

CrateDB operates in a shared-nothing architecture as a cluster of identically configured servers (nodes). The nodes coordinate seamlessly with each other, and the execution of write and query operations are automatically distributed across the nodes in the cluster.

Increasing or decreasing database capacity is a simple task of adding or removing nodes. Sharding, replication (for fault tolerance), and rebalancing of data as the cluster changes size are automated.

Until recently, workloads like these often required a NoSQL solution like Cassandra, Elasticsearch, or InfluxDB, often in combination with a traditional RDBMS. CrateDB makes it possible to handle them in a single system, without sacrificing the familiarity and power of SQL. CrateDB connects seamlessly with tools like Grafana for data visualisation and monitoring which is a perfect fit for time series and machine data use cases.

If you have questions, feel free to contacts us for more information about the tutorial and whitepaper below.

END_OF_DOCUMENT_TOKEN_TO_BE_REPLACED

At Ververica we have a long-standing tradition of Hackathons. In fact, some widespread and very relevant features and efforts in Apache Flink and Ververica Platform originated...